Dark Kim Possible also known as Dark Impossible or Dark KP was the known Demonetic version of Kim Possible during the Dark Aegis Fan fiction in the Aegis Incident in 2005. Althogh Demonetic, Dark Possible was known to have been the original Kim Possible, but had morphed into a merciless Dark Teen girl following the events of her high school Graduation when the Aegis Demon had secretly entered Kim's body without any one including her, knowing.

Though Original Kim had managed to fight off the Dark Aegis for a little time, she eventually lost complete utter control and became fully turned after Ron Stoppable was placed in the Hospital after getting mauled by Shego in a failed Mission in Antarctica.

Almost having to destroy her twin brothers, Ryujian, and Raxis had managed to keep her occupied while Raxis made off with the rest of the Possible Family, but Dark Possible still remained high strong and her power began to elevate after Ryujian had accidently trashed talked Ron.

Dark Kim had managed to escape Ryujian, after she had been pushed through the Window, where she made her way in her Mission Gear towards Ron in the Hospital, however Shego had attacked the Hospital when she first arrived to see Ron, and just moments after she knocked out one of the Staff.

Enraged, Dark Kim's power began to grow to the point where she had managed to prevent shego's hover craft from Escaping and destroy it by Smashing it hard into the ground, but Shego tormented Kim, stating that Ron was taken by Drakken anyway, even after the crash had occurred, in a form of anger, Kim Smashed Shego's arm and spat on her, storming off where hours later she had broken into Drakken's lair and rescued Ron claiming him as her own.

Dark Kim Possible, after reclaiming Ron Stoppable, who at the same time was still not fully healed from his early wounds that he got in Antarctica after having to be ambushed by Shego, had than taken over Cyprus Regional Tower, and terraformed the Tower into her own personal Dark Palace.

Dark Kim had managed at the same time a day after the spring from Drakken's lair, entered Middleton High in an attempt to destroy Bonnie Rockwaller, but her attempts were thwarted once again by Ryujian and Raxis, but her main attempt was mostly thwarted by Ron Stoppable who had shown up some time before the Duo did Dark Kim in a form of Punishment against Ron Stoppable, conducted a Puppy Dog pout, in order to force Ron Stoppable to do things her way, in which he eventually he gives in and dose so.

4 Days after, the Middleton Incident, Ron Stoppable starts to have doubt on Dark Kim Possible's action and at the same starts starts to lose his love for Kim Possible where he results that she had become a Ruthless psycho Path, after she had killed Albert Fergus and his Girl Friend Cindy Rodriguez, a day earlier when Dark Kim Possible had learend of wanna Ron Stoppable's early bullies of Camp Wannaweep, and threatened him to apologize to Ron, or she will destroy Cindy by pouring gasoline onto the ground where it will flow down the small hill and ignite on the electrical fence whitch will eventually cause an explosion. Although resistant at first Fergus had managed to finally crack and apologized to Ron who had urged him to do it so that Kim wouldn't pulverize him any further, although he did his part Kim poured the gasoline anyway and ignited the fence killing the duo and horrifying Ron.

At one particular Result, Dark Kim who apparently did not like Ron's pal Rufus, had no particular idea that Ron had sent Rufus out to gather Wade, Ryujian and Raxis in order to tell them where Dark Kim was hidding.

Dark Kim at the same time not long after had allowed Ron Stoppable to go and see his parents, but at the same time decided to drive him over, much to Ron's nervousness over the saftey of his parents. Dark Kim waited for Ron outside in the Car while Ron was talking to his parents, who unknown to her was Ryujian in which Ron was linking Information towards Ryujian while at the same time making sure Kim was listening to the stuff that she wanted to hear.

After discussing plans with Ryujian, Ron returns to Kim Possible with food in his arms witch at first gains Dark Kim Possible's suspicions until she looks at it with her own eyes with Ron himself sweating. The food passes and Dark Kim returns to Tower Impossible with Ron. A large Heated argument than erupted on November 14th, in which Dark Kim was starting to question on why Ron won't like her after all she's done, while at the very same time Dark Kim had also managed to obtain the power of Aegis in which she had eruptedly made Bueno Nacho disappear in just one big Spell that she conducted from the Balconing, of Impossible Tower, while at the moment Ryujia, Raxis, Wade, Drakken & Shego attacked the tower.

After demanding that Ron stay behind Dark KP Ambushed the team of heros and villains and a large show down erupted on the towers first floor. Dark Kim had managed to finally gain the upper hand with Ryujian after Ron had playfully lied to Kim stating that each one of these beings had a weakness in which she gauntly believed, but just as she was about to finish off Ryujian, Ron who had secretly followed drom Upstairs rushed in Kim Possible's path and was struck instead, by Dark Kim's fist through his stomach. 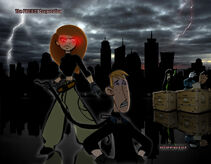 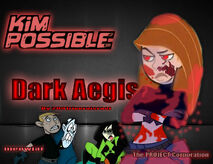 Retrieved from "https://kimpossiblefanon.fandom.com/wiki/2091riveraisrael/Dark_Possible?oldid=7375"
Community content is available under CC-BY-SA unless otherwise noted.