Raxis was a character created by 2091riveraisrael along side Ryujian for The Dark Aegis trilogy of Fan Fics. He was known to have been one of the Main Protagonists of both the Dark Aegis Series and Hokus Fan Fiction, where he was fighting along side Team Possible, before eventually rerouting into an Antagonist in Fan Fiction Durability Hall, along side Ryujian when the duo became quite Keen of returning back to they're time.

Raxis is known to have been the one responsible for the design and creation of the Tank Walker Archive, during the events of the Incident of 2008.

He is known to be half Human and half airplane, which according to the design the airplane half of him is known to be a Concorde. He is constantly able to quickly morph from a human into an Full Aircraft by a magic, that is placed inside his Heart in which a large white light surrounds him and he is automatically changed from a man into a Plane, the process is similar to when he becomes a man again. 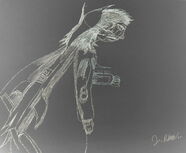 Raxis's main Human self...
Add a photo to this gallery

Retrieved from "https://kimpossiblefanon.fandom.com/wiki/2091riveraisrael/Raxis?oldid=6963"
Community content is available under CC-BY-SA unless otherwise noted.