In the story Grey Matter by Love Robin, the Centennial Falcon is a full-scale fully-functional replica of the principle "hero" starship of the same name from the Space Conflict movie franchise, of which Return to Ios was the top-grossing in theaters.

This article is primarily about the replica. When discussing the Space Conflict franchise's version, its name will be in full and inside quotation marks.

Certain members of the Possible Clan—James, Slim, Joss, Tim & Jim, and occasionally Larry in an advisory capacity—had taken on the hobby project of building a 1:1 full-scale replica of the "Centennial Falcon" in a barn Slim Possible set aside on a remote part of his Montana ranch. The endeavor took several summers, especially during the visits of James and Jim & Tim. Larry too would occasionally offer his insight from his extensive knowledge from the movies and role-playing sourcebooks.

Not just a hobby, the Falcon also served as a practical, yet fun, testbed for James and Slim's emerging cybertronic technology, which allowed James and Slim to use DARPA grant money to fund their fun. So although being a "barn hobby project", the replica is an actual and completely working spacecraft. Fully functional in all respects except for a proper hyperspace capable stardrive. Which was later provided when the Lorwardian's drive was back-engineered and built by Rockwall Industries.

Shortly after the Lorwardian Invasion mothership crashed in a a small African country near the heart of the continent, a party of scientists sent to research it discovered a drab grey alien mold-like spore covering huge parts of its wreckage and spilling out onto the landscape and wildlife, growing swiftly on both, the latter spreading it even faster.

Once its unstoppable spread was calculated to blanket the entire world within a decade, the United Nations appropriated the Kepler's planned mission, re-purposing and rechristening it to 'Backtracker for a mission to backtrack the Lorwardian navigational data in hope of discovering the spore's homeworld and whatever natural agent kept it from overrunning its natural environment. Unfortunately, somehow some mold contaminated foodstuff prompted the ship's computer to self destruct, completely destroying the ship, the Middleton Space Center, and killing crew and many of the staff. Also Middleton is projected as lost with the resulting spread of spores.

Recalled from a trip to a world cheerleading competition in Florida—a divergence point from the second chapter of Every Kim Possible, which had already been postponed due to the invasion itself and now cancelled in light of the new threat, James Possible informs Kim and her squad they are to crew the New Project Backtracker, for which the President of the United States authorized any and all resources be utilized. So while the newly appointed crew drive from Miami to the Lazy C Ranch in Montana, Slim, James and the boys, and Bonnie's father's workers scramble around the clock to upgrade the Centennial Falcon's internal layout from that of the "Centennial Falcon's" to one befitting the mission profile.

Centennial Falcon has appeared in the following:
(may be some duplicate links)

By Story or Series[edit | edit source] 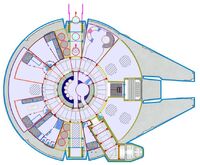 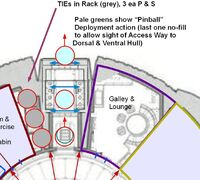 Retrieved from "https://kimpossiblefanon.fandom.com/wiki/Centennial_Falcon?oldid=6123"
Community content is available under CC-BY-SA unless otherwise noted.