Unnamed Characters are those characters, often in the background, which either have no Canon names or were easily missed. For example, how many know the name of the HenchCo infomercial girl in Grande Size Me is Tiffany? Some have been named in Official and or Production venues, but is not widely known. In either case, plenty of Authors and Artists have given them names. This makes identifying them difficult except by general descriptions such as "The Girl in Blue". Which is a less than satisfactory as not everyone worldwide may use the same descriptors.

So as to have no confusion as to which character is which, this disambiguation page is for a gallery of cropped screencaps of the Canon Nameless from Kim Possible. Each image will link to a page titled with either a known Official/Production Name or label (like "Kid 19"), or the most widely accepted description. From there may be links to various Incarnations, generally as a subpage, and or appearances in Artwork.

When it comes to Categories, the Basepage should include Canon Characters as that is what the characters are: Canon to the Show. Same for any appearances in Artwork which do not vary from the Basepage name, or still not named at all. Subpaged Incarnations should instead have Fanon Characters as fan interpretations and information moves them from "strictly canon" status. If there is enough detail, especially a backstory, then Fanon Concept may apply as well. 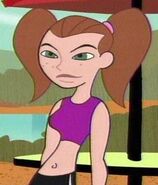 Both MHS and other schools

(There are enough to be their own gallery)

Retrieved from "https://kimpossiblefanon.fandom.com/wiki/Unnamed_Characters?oldid=7817"
Community content is available under CC-BY-SA unless otherwise noted.